By the autumn of 1936 someone who would become one the most influential and imitated of all jazz musicians had been ‘on the road’ for most of his twenty seven years, but hadn’t yet been heard on record. Lester Willis Young had started out as a boy drummer in his father’s band, though in early adolescence he discovered that by the time he had packed up his drums at the end of an evening, the girls had gone.  So, he switched to saxophone.

His inspirations were saxophonists he heard on records, like Frankie Trumbauer, who played a C-melody saxophone, and altoist Jimmy Dorsey, both of whom had light tones far removed from the full-bodied, heavily-tongued tenor sounds that were attracting attention in New York. Having split with his father, Lester played in various bands and had some disappointments along the way.  His big break seemed to have arrived in 1934 when Coleman Hawkins left the acclaimed Fletcher Henderson Orchestra and Lester was brought in as a replacement.  Unfortunately Lester’s stay with Henderson was not a happy one. Henderson’s musicians, used to Hawkins’ full, robust tenor sax sound with its heavy vibrato, made fun of Lester’s smoother, dryer tone.  Leora Henderson, Fletcher’s wife, got involved as well: “Leora…would wake me early in the morning and play Hawkins’s records for me so I could play like he did.” After a few painful months with Henderson, Lester quit. “I left and went back to Kansas City.  I had in my mind what I wanted to play, and I was going to play that way”. Lester had his own tone, his own lithe style; he wasn’t going to follow the trend of most 1930s tenor players and try to copy the Hawk. 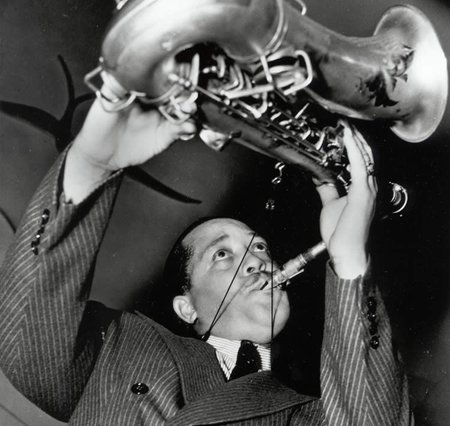 Lester Young: in his early days Lester held his tenor at an angle to his right.

Lester’s next big chance came when he was playing with Count Basie in Kansas City and the Basie band was ‘discovered’ by the influential jazz writer, promoter, record producer and one of the heirs to the Vanderbilt family’s vast fortune, John Hammond.  (Hammond is also credited with discovering Billie Holiday, Bob Dylan, Aretha Franklin and Bruce Springsteen.) But before Hammond could set up any kind of deal, Basie, with little foresight, had signed a contract that committed him and his band to recording for Decca for the next few years for very little money.

Desperate to get some of the Basie and Lester sound on record before Decca, Hammond arranged to record a small group from the Basie band at the earliest opportunity.  That opportunity arose when the full thirteen-piece Basie orchestra were playing in Chicago in November 1936. To avoid contractual problems the recording group took its name from the trumpeter Carl ‘Tatti’ Smith, who was in Basie’s trumpet section, and Jo Jones, Basie’s drummer.  The five-piece group would be called Jones-Smith Incorporated and in addition to Smith and Jones, would involve Basie on piano, Walter Page on bass and Lester on tenor.  In his autobiography Hammond tells how the five musicians together with singer Jimmy Rushing met at ten in the morning on 9th November after appearing all night at Chicago’s Grand Terrace ballroom and having had no sleep. The studio they used was just “a small room – about twelve feet by fifteen…too small for a grand piano”.  Hammond had one engineer and decided to use just one microphone, though two were available. Even by the standards of the time, as Hammond admitted, “conditions were primitive”, but the results were extraordinary. 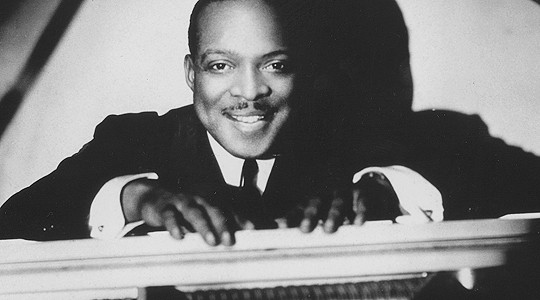 If the matrix numbers for the Hammond session give us the order of recordings, the quintet began  with ‘Shoe Shine Boy’ and followed up with two numbers featuring vocalist Rushing, ‘Evenin’’ and ‘Boogie Woogie’.  On what were thought of as the surviving takes of these tunes, Lester solos wonderfully and provides fill-ins and riffs behind both Rushing and Smith, perhaps bringing a slice of Kansas City spontaneity to the occasion.  But the best was still to come.  According to the matrix numbers, the last piece to be recorded was George Gershwin’s ‘Oh, Lady Be Good’. On what has been thought of as the only surviving take of this tune, Basie, with Page prominent, takes the first chorus before Lester enters for two choruses and delivers one of his greatest solos. Compared to the much-copied heavy Hawkins sound, Lester’s tone is compact with little vibrato, and, while, for Hawkins, improvisation involved energetic chordal exploration, Lester’s improvisations are said to be based on a concern for melody, which might suggest a lack of adventure. Yet, if Lester is improvising melodically on the master take of ‘Oh, Lady Be Good’, then his approach to melody is spring-heeled, buoyant and carefree. And he plays with tremendous swing, but with little obvious rhythmic emphasis. This is soloing for fun, free from stress or strain or awkward corners or abrasive edges. Where Hawkins would push, Lester flows. Nowadays when I hear this track I am reminded of Wynton Marsalis’ remark: “The most important emotion in jazz is joy”. Loren Schoenberg describes this performance as “sheer perfection”; “a work of genius” was Humphrey Lyttelton’s honest appraisal. The recording session ended at one o’clock of the afternoon of 10th November and the musicians went to get some sleep. In three hours they had recorded four tunes and Hammond had master takes plus alternative takes of each tune (1).

Lester’s recording debut had been a triumph. Unlike many musicians, he had entered a recording studio for the first time with his style already well-formed and, whatever the drawbacks of the venue or the hour, he had played superbly. Because of his ground-breaking role, Coleman Hawkins was often heralded as ‘the inventor of the tenor saxophone’. Schoenberg says that in these 1936 recordings from Lester we can hear “the reinvention of the tenor”. When discs from the November session were released, they became compulsive listening for the young Charlie Parker in Kansas City and, as part of his woodshedding, he would learn Lester’s ‘Oh, Lady Be Good’ solo note for note.

Having made his first recordings, Lester’s career started to pick up pace.  Before the end of 1939 he would have made another thirty-eight or more trips to the recording studios, sometimes as a member of the memorable small groups that accompanied Billie Holiday (2) and, most frequently, as a member of the Count Basie Orchestra.  In addition, he had crossed America with the Basie band, had featured in numerous radio broadcasts from across the country with Basie and had appeared at Carnegie Hall on three occasions, first as a guest star at the famous Benny Goodman Concert in January 1938 and then in John Hammond’s Spirituals to Swing Concerts in December 1938 and December 1939. And the pace didn’t slacken for most of 1940.

Such exposure began to attract disciples, and not just in Kansas City. In fact, according to one authority, “What eluded Coleman Hawkins despite his life-long heroic strivings, namely, domination of the saxophone world, virtually fell into Lester’s lap” (Schuller, 1989, p. 547).  The idea of a person like Lester, who was shy, retiring, gentle, sensitive, soft-spoken and used an almost private language that many couldn’t fathom, dominating other musicians surely has to be contradictory.  But, when we consider the evidence, the sheer number of saxophonists who fell under Lester’s spell, saxophonists who, in time, would become leading lights in the world of jazz, we will also realise that dominance doesn’t have to come through force.  Amongst the legions of tenor players who would be indebted to Lester’s revolution we could list Al Cohn, Allen Eager, Stan Getz, Jimmy Giuffre, Warne Marsh, Brew Moore, Zoot Sims and Herbie Steward. (These white musicians were referred to by Lester as “the grey boys”).  Other tenor players who were strongly influenced by Lester were Dexter Gordon, Wardell Gray, Illinois Jacquet, Hank Mobley, Paul Quinichette, Frank Wess and, in this country, Ronnie Scott.  Two alto saxophonists strongly indebted to Lester were Charlie Parker, whose impact on jazz would be seismic, and Lee Konitz, and amongst the baritones, Serge Chaloff. 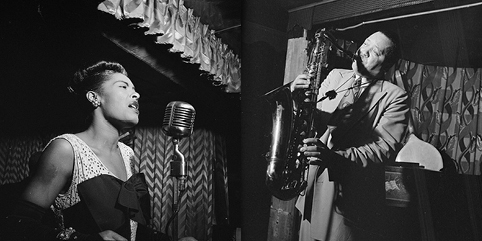 For reasons that are still not entirely clear, Lester left Basie at the end of 1940, though he would return late in 1943. In 1944 he was drafted into the US Army and spent most of his military service in detention barracks in Georgia. During the 1940s, for which his military experience might provide some explanation, Lester’s style changed. His light tone became thicker and darker, and joy frequently gave way to melancholy.  Lester carried on playing until shortly before his death, aged forty-nine, in March 1959.  To this day critics continue to argue about how his later recordings (3) compare with those he made when he burst onto the scene with Basie and Billie Holiday.  That was when, as Billie herself recalled, “I started calling him the President. It got shortened to Prez, but it still means what it was meant to mean – the top man in this country”. For a few glorious years he was the top man anywhere.

I am most grateful for the knowledge and encouragement of Ted Jenkins and Richard Temple.

(1) All four master takes from the Hammond session of 9th November, 1936, plus an alternate take of ‘Shoe Shine Boy’ are available on ‘Classic Columbia, Okeh and Vocalion Lester Young with Count Basie (1936-1940)’, Mosaic MD 4-239.  Writing in 1990 Frank Buchmann-Muller said the that the three other alternate takes had been lost, but Mosaic’s recent 8 CD set ‘Classic 1936-1947 Count Basie and Lester Young Studio Sessions’, Mosaic MD 8-263, includes the ‘lost’ alternate takes of ‘Evenin’’, ‘Boogie Woogie’ and ‘Oh, Lady Be Good’. The master takes of ‘Shoe Shine Boy’ and ‘Oh, Lady Be Good’ are available on ‘The Lester Young Story’, 4 CD, Properbox 8.  Secondhand copies of this collection can still be found for reasonable prices. ‘Shoe Shine Boy’ and ‘Oh, Lady Be Good’ can also be found on ‘Lester Young/Basie Days’, Saga Jazz 07, and you may find some of the Hammond sides in other Lester Young collections. You may also find that the date for the Hammond session is wrongly given in some collections as 9th October, 1936.

(3) Two later albums that are well thought of are ‘Lester Young with the Oscar Peterson Trio’ from 1952 and ‘Jazz Giants ‘56’ with Roy Eldridge and Teddy Wilson. Both albums are to be found on the competitively priced ‘Lester Young; Seven Classic Albums’, Real Gone Jazz, RGJCD 473.

Buchmann-Moller, Frank (1990) You Got To Be Original Man! The Music of Lester Young (Greenwood Press, New York).