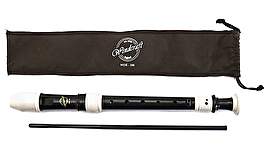 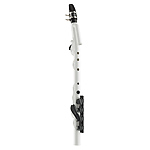 The first Recorder is thought to have been created in the middle ages and has been a firm feature of lots of baroque and renaissance music. It was revived in the 20th century and has since become very popular with amateur musicians. Although there are many professional recorder players out there, especially for certain types of music.

How is the Descant Recorder played?

The recorder is played through a mouthpiece (blowing into it) and is held lightly in the hands in a vertical position. The pitch is controlled by the movement of the fingers up on the holes of the instrument and the sound produced is crisp and clear. Depending on the country and model, the holes on the body of the Recorder vary. Normally there are four on the front and one at the back, however some are designed for the German ‘fingering’ technique and they have five holes. Unlike most other woodwinds in the woodwind family, the Recorder has no reed. This lack of reed makes it much simpler to master, which has made it a very popular choice for children and beginners.

Where is the Descant Recorder played?

Thought to be created in Europe, it occasionally features in orchestral pieces - though is far more commonly played only with other recorders in group ensembles. Famous Descant Recorder players include; Edgar Hunt, Daniël Brüggen, Jorge Isaac, Capilla Flamenca, Ricardo Kanji and Bertho Driever.

Some of the most popular recorder pieces are:

Here at Dawkes we have a wide range of Descant Recorders available to purchase, perfect for beginners, intermediates and experts. If you’re looking for any help or guidance in choosing the best Recorder for yourself, we’d love to help advise you. Our team are musical experts and will be able to talk you through the different options available.