As fellow clarinettists, here at Dawkes we understand how important it is to find the right reed for your mouthpiece.

Musicians often end up purchasing box after box of reeds that not only are the wrong strength, but also of the wrong style for their mouthpiece. These unsuccessful attempts result in wasting both time and money, along with causing unnecessary frustration for the player.

To combat these issues, we have designed a variety of reed selection packs, each pack containing six reeds specifically tailored to suit your particular mouthpiece. For a modest price, you have the opportunity to try a selected assortment of reeds…and hopefully find your optimum set-up!

There will always be a good player who contradicts our advice, but our pairing of reeds and mouthpieces is done on a design basis, not formed on opinion but facts. The USA Cut Reed Selection Packs include reeds with thick tips and thin hearts and will suit mouthpieces with a American style facing which has a flatter curve towards the tip.

Which Mouthpieces Will These Reeds Suit?

The USA Cut Reed Selection Packs are suitable for the following:

What's In a Pack?

USA Cut Reed Selection Packs (sold by strength) include a varied selection of 6 reeds from the following*:

* PLEASE NOTE Contents may vary depending on stock levels, we are unable to swap reeds after delivery.

The chart below can be used as a reference as to which strength selection pack you may wish to order based on your current reed choice. 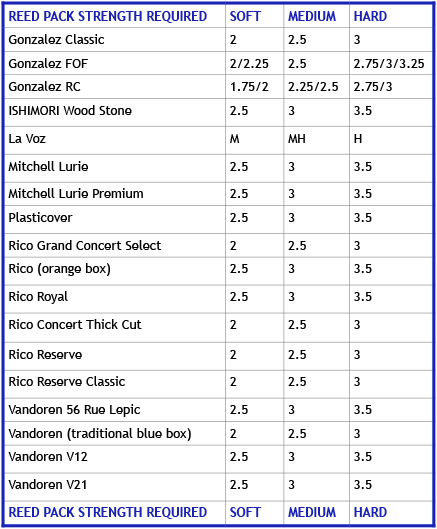 If your current mouthpiece and/or reed choice doesn’t fit within these parameters, please call us on 01628 630800 so we can create a custom made pack for you.

I had a hard time finding the right reed for my clarinet and chose this selection pack. Found the perfect reed!

I have played on Vandoren original reeds for years. This is a very good way of seeing what else is available nowadays.

I received a trial pack for reeds chosen for my mouth piece - so far tried one out of the 5, lovely reed :)

We ship to a large number of Countries. Select at the
checkout
As a specialist we stock large amounts of Woodwind & Brass Instruments and Accessories
Dawkes Music have been voted best Classical Music shop
twice.