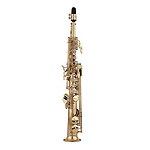 In 1951, his son, Takanobu, made a prototype Saxophone after following in his father’s footsteps in the family business. To put this in context, although some instruments were already being produced in Japan they were of a very basic quality. Over in Europe and the US there were classics such as the Selmer Super (Balanced) Action, the King SilverSonic, Conn 10M already in production and being used by professional players.

International recognition and indeed sufficient quality don’t happen overnight with regards wind instrument production. Although they had a full range in place by the late 1960’s (15 models from Sopranino to Baritone) the first real impact internationally was with the Elimona Series (800 series) which were in production from 1978-1985 (see image below). We still see some of these Elimona models crop up on the second hand market and they are really great Saxophones, especially the Soprano S880 which was the world’s first Straight Soprano with a removable neck – and arguably the world’s first Soprano which is pretty much in tune top to bottom!