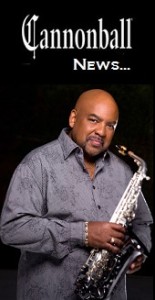 I was lucky enough to meet Gerald Albright a couple of years ago at the NAMM show in the USA where the great and good of the music industry assemble (and me!). I had been  an admirer of his playing for some years, his CV is pretty impressive with 16 solo albums to his name and well over 1 million records sold…1 million! For an instrumentalist that is a pretty major output! He’s also recognised for his work as a touring live Saxophonist with great Pop stars such as Whitney Houston and most commonly Phil Collins. This work has propelled him onto a world stage and I’m pretty sure he must be one of the most ‘seen’ live Saxophonists because of this.

Although we’d met and I’d spent some time talking to him about Cannonball Saxes and his touring life etc I’d never got to see him play live for one reason or another. If you listen to any of his albums one of the aspects that grabs you is what appears to be an unrivalled control over his altissimo range, with lot’s of jumps high to low and back again seemingly presenting him no technical issues, all of this coupled with a solid, rich and full tone.

I was interested to see this in a live scenario and I’ve got to say I was blown away…If anything, it was even better live as you got to hear that for him the range well above the usual keyed ‘high F#’ on a Sax are no problem at all and actually are produced with the same full tone that anything lower down is presented with. Too often you hear players screaming and hanging on for dear life up there, of course there can be a musical moment to do this if the setting is right but usually it’s ‘squeaky bum’ time and you often here some hit and miss action in the zone well north of the standard written range.

Mr Albright plays on a Cannonball GA5-SB, that of course you can find at your favourite specialist Woodwind dealer, the fullness of tone and ‘easy’ altissimo are comments that are often made about the Cannonballs, especially on Alto. They are a little heavier than most other brands and that is one aspect of the rich solid sound. Whilst I’m not attributing Mr Albrights range up there to his Sax it is clear that he feels very comfortable on his Cannonball and deems it the absolute best tool for the job in hand.

Of course smooth and ‘funky’ jazz isn’t everyone’s cup of tea, with some traditionalists probably not being big fans but what you can’t do is take anything away from the full tone and ridiculous technique on display, interestingly I spotted Courtney Pine in the audience…a penny for your thoughts Courtney? Once you break down any barriers of perceived ‘proper’ jazz and actually start to feel this style of music it would take a pretty resolute critic not to have the feet tapping and feeling the infectious groove and rhythm passing through them. It is not supposed to be a Coltrane/Adderley style gig after all, and the 100- in attendance showed a pop star type excitement for Mr Albright…I for one would be delighted to see him again, maybe at Dawkes next time?!