This is the second part of our look back at the life of our founder Jack Dawkes. In the first blog Jack discussed his early life, time spent distance learning composition in WWII trenches(!) and leaving to become a working musician. In this second blog Jack talks further about his playing career and subsequent progression into Instrument Repairs and provision… 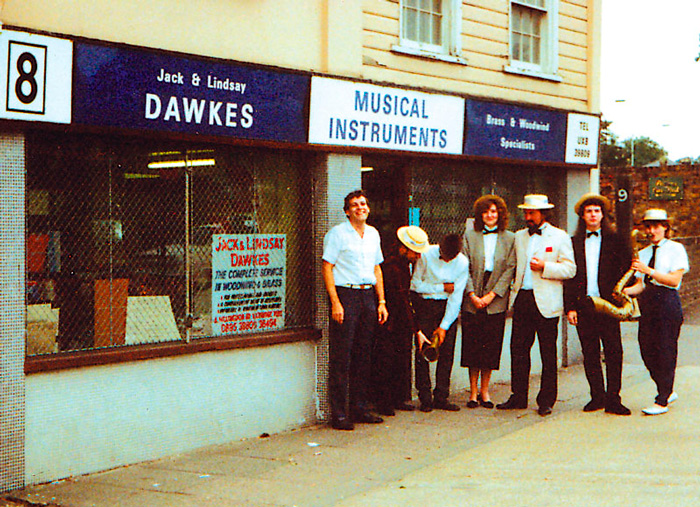 The decision of some members of the Squadronaires Dance Band to leave opened up an opportunity for me. For the very first time, non-RAF musicians were recruited into the band and I replaced Jimmy Durrant. At the same time Don Lusher and Ric Kennedy replaced George Chisholm and Eric Breeze. Don Honeywill came in on baritone when Cliff Townshend moved up to play lead alto. I moved house to Hayes, Middlesex as it soon became clear that no matter where the gig was, the band coach ALWAYS came back via Uxbridge where Tommy McQuater, Jock Cummings and Andy McDevitt lived.

Arranging for this band was a real pleasure – I remember one special feature I scored for Eric Delaney called “Showcase for Drums” which allowed Eric to demonstrate his skill around the kit. What stamina! Eric also formed a jazz group with Don Lusher, Jimmy Watson, Don Honeywell, myself, Dennis Wilson and Charlie Short to do some jazz clubs. I also fitted in the job of staff arranger for the publishers Bradbury Wood, which entailed scoring for all types of groups and styles. Serious study was put in to improve my writing for strings to avoid nasty remarks from the “gypsies” as we liked to call them. In October 1951 the Squads decided to do a season in the Isle of Man and having built up a freelance connection in London, I was reluctant to go away and, with some regret, left the band. 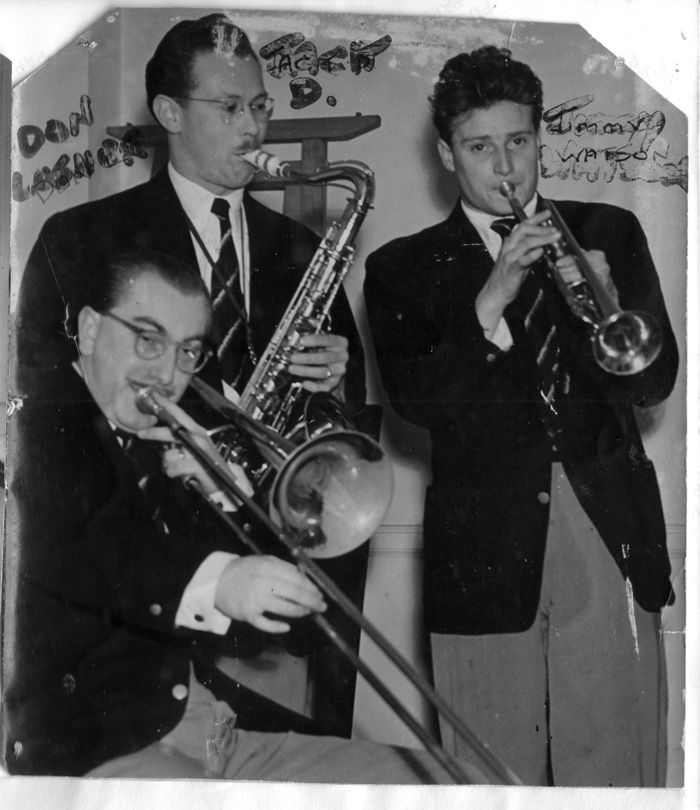 It was about this time that I made the trip to New York as part of “Geraldo’s Navy” as the ships’ orchestras were called. We were just holiday deps for the regular guys and were a motley crew. The second alto player wore a rather cumbersome hearing aid with a wire leading to a body-worn receiver. This used to become disconnected occasionally so that he could not hear what was going on. I never figured out if this was accidental or deliberate. On arrival in New York, I found my way to a bar which was known to be a hang-out for musicians and got chatting to a record company A & R man. Learning that it was my first trip to NY, he insisted on showing me around all the legendary clubs and locations. He was very keen to show me 52nd Street, so that I could see and hear my heroes of the jazz scene. A very generous man and a memorable experience.

Sydney Lipton at the Grosvenor House, Park Lane was the next step and the hours suited the cultivation of freelance work and we broadcast quite frequently from the hotel. Some excellent players passed through the band – Bill McGuffie, George Latham, Johnny Shakespeare and trumpeter Freddy Clayton. Freddy spent his breaks in the bandroom writing his book on “How to play jazz” and another bandroom entertainer was the eccentric pianist Billy Penrose whose party piece was chewing glass tumblers.

During the 4 years spent with Syd my teaching connection had been building and I decided to form a Student Orchestra (one of the earliest in the country) to give the students experience of section work and eventually to make a disc so that they could hear themselves. It is gratifying to think that some of the members still keep in touch to this day.

An interesting sideline during this fairly hectic period was fixing musicians to appear in films made at Pinewood studios to “dummy” on screen to the music that had been pre-recorded in the studio. Apart from the pleasure of appearing in films involving Marlon Brando, Sophia Loren, Charles Chaplin and the odd Bond movie, a couple of episodes stand out. One was the sight of Muir Mathieson trying to synchronise the bowing action of my “dummy” violinists with the recorded symphonic music. In those days the fellows booked did not always play the instruments they were holding – some had never held a violin before in their life. After this fiasco we always tried to book chaps who actually played the instruments they were holding.

The other epic was “Caesar & Cleopatra” where the chaps had to climb up on to pillars and high steps with fanfare trumpets wearing only togas to cover their embarrassment. This was being filmed in October and although I demanded ” cold money” for the boys, several went down with colds and flu. Many having worked in clubs until the early hours, they were not in any fit state to withstand that chill wind whistling up their togas. The final straw was that Elizabeth Taylor was ill and the whole lot was scrapped and moved to Italy.

A long spell of theatre work followed with some excellent shows such as “How to Succeed in Business”, “Hello Dolly” under the batons of Alyn Ainsworth and Burt Rhodes and the 11pm finishes meant that I could go and dep in clubs until the early hours. Hardly a healthy lifestyle but it paid the mortgage.

A very enjoyable show was “One over the Eight” with Sheila Hancock, Kenneth Williams and Kenneth Connor. A sextet led by ex-Ted Heath pianist Frank Horrox provided the music. The line up was Frank, Don Lawson, drums), Geoff Southcott, bass, Chick Norton, trumpet, myself on reeds and a guitar player. The Duke of Yorks was an intimate theatre and the band were very close to the audience and Frank used to make his entrance after we were all seated and the audience was waiting in quiet anticipation. After Frank had taken his bow, Don would often slip a “whoopee” cushion on to his piano stool. When he sat down the show would get off to a rip-roaring start, much to the delight of the crowd. Being the lovely man that he was Frank would give an embarrassed little smile and get on with the music. 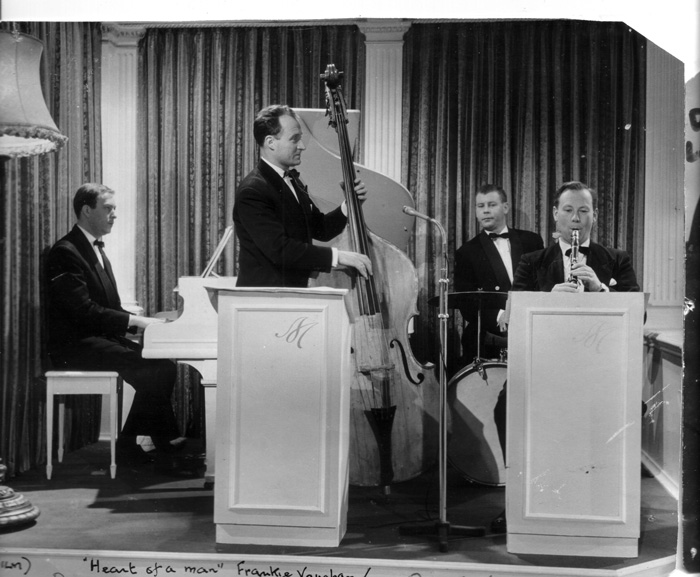 What I regard to be the third phase of my career overtook me when, as a result of my war service in the artillery, my hearing went for a burton. After many sessions with specialists I was advised to seek another way to earn a living. I was, of course, completely shattered by this turn of events, and after sitting at home feeling very sorry for myself for a couple of weeks, I went and had a chat with my friend the woodwind genius Edward Planas at his home in Iver Heath, Bucks. Ted took me under his wing and gave me a crash course in Woodwind repairing and I took to it pretty well. I had not heard of disability benefits at that time and it never occurred to me that anyone would give me money for not working.

I set up my workshop in the garage at home and some good friends entrusted me with their instruments which said something for their blind faith in human nature. My first tenor overhaul involved strip down, tighten mechanism, clean and buff polish, degrease and re-lacquer, re-pad and reassemble – a whole week’s work for £18.00! Betty my wife had to muck in and help with the polishing etc. to get us up and running. The word slowly reached the RAF Central Band at Uxbridge, and orders to sort out their instruments began to arrive. 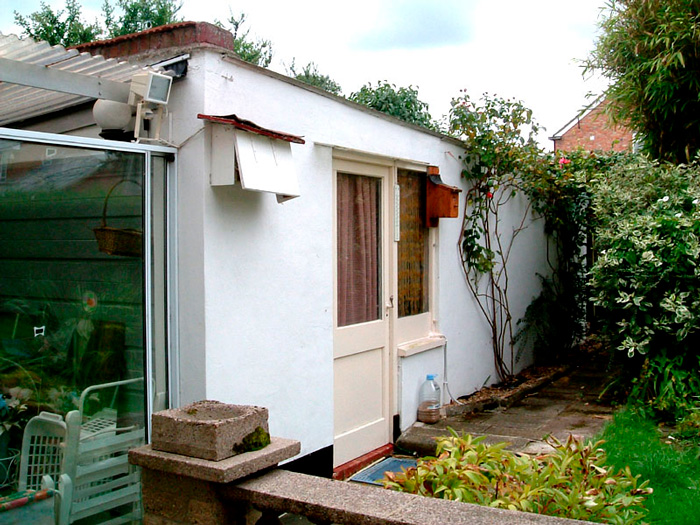 The supplies of repair materials such as pads, springs and cork were a constant problem and eventually I went over to France and arranged to get my orders direct from the manufacturer. However there were still delays in the arrival of the goods and I had to order far more than I needed to make sure a steady flow of the necessary bits were to hand. I was soon in a position to pass some of the extra parts on to other repairers – thus the firm that was to develop into WINDCRAFT Ltd was created.

A similar sequence of events happened regarding the supply of instruments – as teachers came for advice on the selection of suitable instruments for their pupils and subsequently asked me to supply them, some dealers got upset – I was still working from home which in their eyes was not playing the game. My son Lindsay was by now helping me in the workshop, so we opened our first shop in Uxbridge, which by coincidence was opposite the RAF Central Band Headquarters.

Steady expansion of the business has taken place over the years and now occupies extensive premises in Maidenhead, Berkshire, housing wholesale, mail order, retail and repair departments all under one roof. We employ eight qualified repairers and all sales staff are skilled musicians, many with degrees. As a result, all our customers have confidence that the people they are dealing with know what they are talking about.

My son Lindsay is now in control of the business* and he has built up an enviable reputation in the music trade with his world wide contacts, his frequent visits to various factories giving him a knowledge of manufacturers’ products second to none. Two of Lindsay’s sons are now involved in the business so it looks as though I can round off Phase 3 and retire from the scene gracefully.

*The text used for this blog was written in 2006 by Jack. Within a few years both Jack and Lindsay had sadly passed away. The Dawkes company is now run by Jacks grandsons David & Jon and we’re delighted to have recently welcomed one of David’s daughters (Sasha) to our full time ranks. Many of our more experienced staff members spent time working with Jack and Lindsay before they passed away and their good natured honest spirit is always propelling us forward. 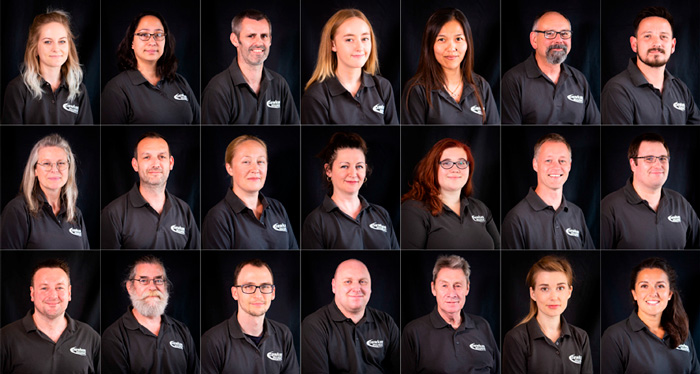