What is a Cornet and how does it Compare to a Trumpet?

If you don’t play a brass instrument or are not part of a band, you can be forgiven for getting a little confused over the different types of smaller instruments – especially as they can sometimes look very similar. Take a cornet and a trumpet for example, people often think they are one and the same, when in reality there are a number of subtle differences between the two.

A difference in history

Probably the most significant difference between a trumpet and a cornet is their histories. The trumpet is a musical instrument which has been around for centuries, perhaps even millennia. Initially made from horn and used as a signal, it has developed over time into a more sophisticated metal version of a signal horn, and then with the introduction of valves, into a musical instrument. Therefore, the trumpet has a long history both military and ceremonial, as well as musical.

In contrast, the cornet is a relatively modern instrument as it was invented around 1828 when musicians added valves to a post horn in an attempt to create a musical instrument which had a wider range and different sound to the trumpet.

A difference in sound

The next difference between the trumpet and the cornet is their sounds.

Whilst many people think the trumpet and cornet sound the same, they actually make quite different sounds.

There are two types of cornet on offer, which both give different sounds. A soprano Eb cornet produces a higher sound than a normal cornet (Bb), and so in order to play full musical range on a cornet, you might occasionally see cornet players swapping between a higher and regular instrument during a brass band performance. Alternatively, some players prefer to play on just one or the other.

In terms of tone, the trumpet is noted for having a livelier, clearer sound, where the cornet is a deeper, broader sound. 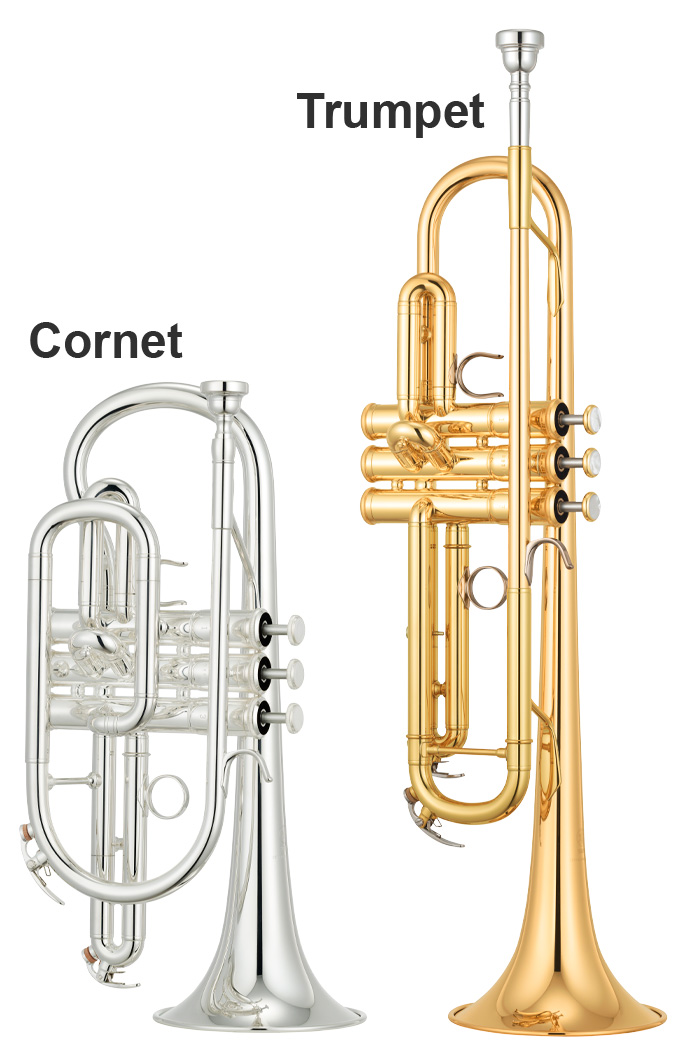 A difference in design

If you look closely at a trumpet and a cornet, you’ll notice there are a number of physical differences. The cornet has four 180 degree curves in its tubing whereas the trumpet has only two curves. The cornet also has a conical shaped bore (the main bit leading up to the bell where the sound comes out) whereas the trumpet has a cylindrical shaped bore.

The two instruments also have different mouthpieces, although it is harder to notice this difference merely by looking at the two instruments. The trumpet is the only brass instrument to use a shallow, bowl shaped mouthpiece, whereas the cornet’s mouthpiece is deeper and v-shaped.

At Dawkes Music we stock a wide range of trumpets and cornets suitable for all levels – browse our selection here!